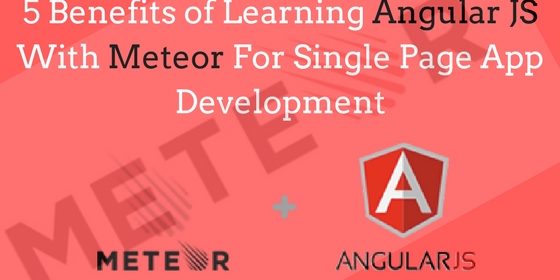 Meteor is the collection of libraries and packages, which are tied up together as a full stack JavaScript (JS) framework. Meteor, as it is and by a few is also called as Meteor Magic. The manner in it is composed of basics from other libraries and frameworks makes it clear to model the applications. Necessarily, it advances smooth web development process. Meteor is flexible and needs less code, consequently fewer bugs and superior quality with the more durable results.
Meteor is easy to master and agile to develop with—which makes it developer’s favorite choice.

Meteor needs less amount of code. Instead of using a thousand lines of code for a function like any other frameworks, simply in Meteor 10 lines are enough. Incredible! Apparently, speed is the most outstanding benefit of Meteor.

As the usage of mobile devices has insanely increased, it is obligatory for any business type to have its mobile-friendly app. SPAs built with Meteor work excellently on the desktop as well as on mobile devices.

When someone modifies the code, the data on the screen gets updated at the instant moment without any halt. There is no slow-loading feeling which often results in the data’s server and back trip.

With Meteor, you can create single page applications, in a brief time and also the way you want. Furthermore, Meteor is an open source framework that also owns a solid team that looks after the whole projects and is accountable for new releases, QA, etc.

Why use Angular with Meteor?

The full stack Javascript framework, Meteor simplifies a plenty of stuff in the web development process. AngularJS on the other side is a frontend framework that smartly executes HTML with reusable elements and two-way bindings.
With Meteor you can furnish Full-Stack Real-Time JavaScript or NodeJS development environment. It is the best featured starred GitHub NodeJS framework. By the amplification of Angular-Meteor boost, Meteor is a now a far-fetched alternative for Angular developers for the development of responsive web and mobile applications.

Save Your Skill Set

Mastering Angular does not happen without any planning and can be a bit of a zealous exciting journey.
As an Angular JS developer, you already know it. Following all the Meteor introduction and features pretty reasonable you have to reconsider now to think about jQuery and handlebars. And after mastering AngularJS, there is indeed no possibility of acquiring anything different which will dominate it all.
Angular Meteor gives you a legitimate possibility to save all your AngularJS abilities while acknowledging everything that Meteor brings to your knowledge. This benefit of Meteor helps maintain your AngularJS expertise.

Mongo, Express, Angular, and Node, which forms The MEAN stack was assuring to carry JavaScript all over the development world. Although, JavaScript is the most favorable choice the code is often complicated. This is confirmed; examine in REST how you interface with your server data –

You create the REST endpoints.

To add the reaction to your model, you do it using var data = response;

Working with Angular and Meteor is clear. You can certainly create a code that runs both on the client and server side. You do not need to employ the external system. You can basically create the code once, using, var data = Data.find (‘my data).
On the database, at the front end and back end, to code the application, Meteor.js uses one single language. JavaScript runs great at all the ends and delivers an excellent client-server performance.

There are a plenty of reasons to appreciate Angular as the best framework for web application development. The characteristic that makes Angular JS a “Super-heroic” Framework is the two-way data binding. Meteor equips the developers with the real-time data binding between the client-server data.
With the applicability of Meteor at the client and server side and also by using the Meteor-Angular at the client side, it proffers you the all the access to two-way data binding. This feature keeps you well synchronized creating great sync between the database at the client and server.

With appropriate use of Meteor, you can genuinely use Angular not to run just to an order of REST services at the back end. It is entirely outfitted to accommodate the production of present-day Single Page Applications.

In its six years of AngularJS to a great extent, it has comprised and compiled an enormous group of developers that enhanced this recoiling framework. Simultaneously, the Meteor community is furthermore expanding at a shooting speed with an ever-booming figure of packages added profoundly to the core packages from the Meteor Development Group.

The MEAN stack, merely involves MongoDB, Express, Angular and Node.js encased together. Though, there’s no consistency about it. The result of every Mean Project differs according to the developer who is in the project development.

The reason is that the project developed using MEAN needs less additional gears like Testing and deployment environments to accomplish the tasks. Here, the MEAN stack alone cannot do it. It entirely depends on the developer that how one can braid all these unitedly to attain the as desired project output. Consequently, all MEAN projects differ from one another.

When other developers observe the file structure code, it becomes challenging for them to take a note of it at first. This complexity is resolved with the applicability of Meteor.

Meteor gives us the quick beginning, explicit deployment and package system. These have permitted any developer to watch at the project structure and code and can communicate what works where.

The features have improved the experience and skillset of the developer and also attained the excellent knowledge at the user end. With the seamless two-way data binding and comprehensive full stack development, Angular JS Development Company is smart to build more dynamic and responsive web-mobile apps to accomplish the business goals.
Businesses Hire Hire Angular JS Developers who reap the best benefits of Meteor features for application development that satisfies the project objective within the budget and time.