iOS or Android App Development – What should You Choose? 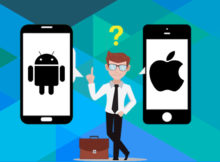 We have already entered into the world of mobility where everything is accessible on a smartphone. From e-wallet to online shopping, mobile phones have made our life easier.And, this could possible with the invention of mobile apps. Today, several startups and well-known organizations are launching their mobile app in order to make their business more successful. Being a startup, you should come up with a mobile app that will help you target a large number of audience.
Before you roll up your sleeves and start the development process, you need to consider several important things such as:

When it comes to choosing a platform for your upcoming mobile application, there are two main options available i.e. Android or iOS.Both of these platforms have been dominating the mobile world since the inception of the smartphones. So, what will you choose? Confused? In this blog, I tried to provide comprehensive detail about the iOS and Android App development. Hope, this will help you take the right decision.

Research reveals that iOS applications earn 75 percent more revenue while comparing to Android. However, Google Play has a bigger number of ad-supported applications. It has been a commanding lead in market share (84.7% for Google Play and 11.7% for iTunes).The revenue models of iOS and Android represent the approaches of Apple and Google.So, if you’re planning to create a premium app, the Android should be your target marketplace. iOS users have been known to be more likely to pay for apps before downloading and this doesn’t seem to be changing. Moreover, if you are wondering to target a large user base while facilitating high revenue through advertising, then also Android will be the best option for you.

It is one of the most important factors that you should consider before development.With iOS development, you will get a few different hardware configurations. Apple designs all of its mobile phones with high-quality hardware, and their devices are complimented with a comprehensive range of peripherals.On the contrary, Android phones have a broader range of capabilities. It is easy to build Android apps for mobile phones with amazing specifications.However, several low-budget Android devices have to struggle to run bigger games or app that demand high processing power.Following factors must be taken into account while considering the differences between iOS and Android:

If your upcoming app or game is going to be depended on one of these factors mentioned above, then make sure the platform you choose has the configuration you need.

An iOS app looks sleek on your Apple device and makes you feel that you are using a mobile application. On the contrary, Android applications have a real-life design that looks more real on your smartphone. Google’s UI elements have edges and shadows that gives it an authentic look.

There is a major difference between the basic layout of both iOS and Android app. While Android application is based on a drawer system, iOS applications use a tab bar that provides access to the top-level pages of a mobile app.

Most Android devices consist a real back button that makes it easy to go back. Apple devices don’t have that kind of real button thus you need to think how to go back in your app or game.
UI components, physical buttons, and UI controlsof both platforms are almost different.If navigation is a significant feature of your mobile app, then make sure your app’s appearance is as native as possible on both platforms whether Android or iOS.

Time frame is another most important factor to consider while starting the development process.Once you’ve built your iOS application and deployed it to your devices, it is easy to find bugs. With Android app development, you have to test your app on several devices with different configurations (screen size and other capabilities).Besides, you will have to start testing again after fixing the particular bug.
3 out of 5 people in the United States own a smartphone today.The growth of smartphones and mobile apps indicates that every business need to launch a mobile app. If you are still confused between iOS and Android, there is a faster and affordable option than native development.Cross-platform tool provides you with an opportunity to develop a single app for different platforms. If you have any queries about the differences between iOS or Android, or you think something is missing from the post, let us know in the comment section.